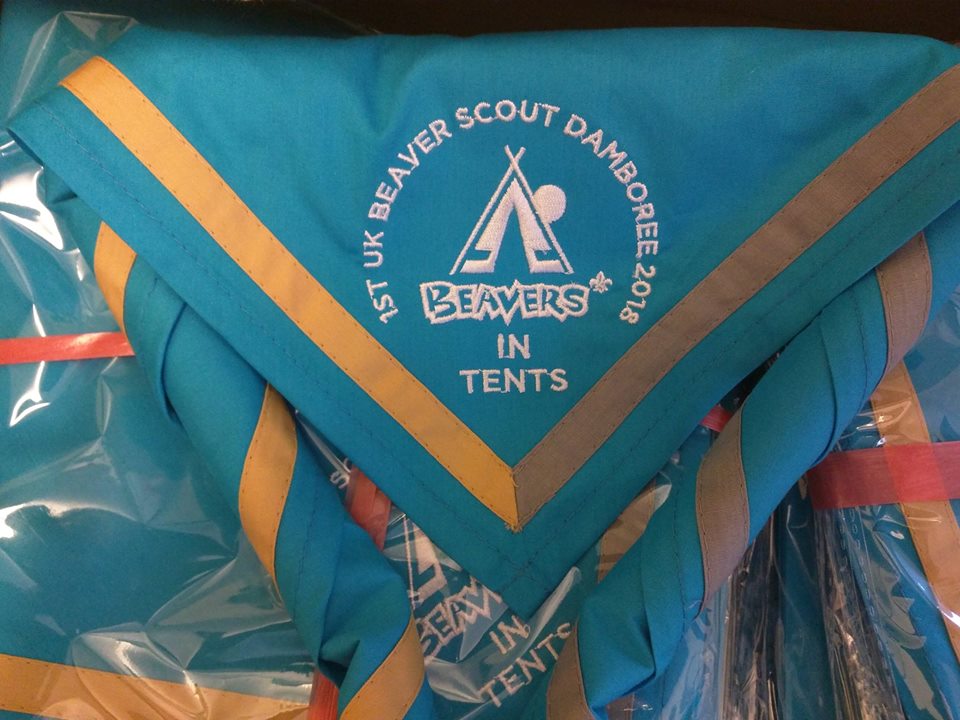 It’s a question that seems to be coming up again now that we’re asking for Occasional Badge Approvals.  So, as Current Front Man, I thought it would be useful to provide an explainer of how legit we are, as well as what we understand HQ think of us, which is of course subject to change without notice, depending on who we’ve annoyed this week.

Please read all of it because it’s important we clear up any misunderstandings about our existence as it seems in some areas it’s proving a barrier to people taking part, and leaders being able to get a Gold Badge.

We are a District Active Support Unit, homed by Milton Keynes Scout District, which is part of Bucks County, our organisational structure is broadly as follows:

The Steering Group is made of a number of Scouting individuals who were involved from the start, presided over by John May, OBE, our El Presidente, Grand High Meerkat, Crayons, and others.

This group is responsible for the moral direction of Damboree, and acts as the guide to ensure we stay true to our objectives.

They were part of the first Damboree cycle, which operated at the fringes of Scouting (see history timeline below).

This consists of around 6 people who are responsible for the execution of the operational side of Damboree, the website, the badge shipping, badge design, including criteria, social media, marketing and most importantly the finances.

This is a unit of around 40-50 members who are the local conduits to promote Nights Away within their scouting communities. We have a range of scouting roles involved from DC’s to NAA to Section Leaders, all cheerleading getting your young people out camping.

Milton Keynes Executive acts as our Executive in scouting.  Our Service Agreement is held by Milton Keynes and is reviewed, and hopefully approved, annually. So far so good.

It was evident from social media that the POR changes from 2015 allowing Beavers to camp, for more than 24 hours, no emergency accommodation requirements etc hadn’t permeated through The Scouts. This was despite the best efforts of the HQ comms machinery, the Nights Away Adviser network and the efforts of the, then, UK Technical Nights Away Advisers.

So kicking around on Facebook it was suggested that there should be an initiative to promote #BeaversInTents. But it needed a catchy name and lo, Damboree was chosen.

Andy Sissions, our Grand High Meerkat, and UKTNAA at the time, contacted a number of us passionate about such things and with skills he felt would help him deliver on this idea.

So the original Steering group was formed, with support from our then Badge Partner Karuna Badges who supplied the badges and managed the ordering process, and we started the journey into becoming Damboree.

2018 started well, we had a website, we had a badge supplier, we had a social media campaign, and it was all rather insane. It was more successful than we imagined it could be.

So we started looking how we could formalise into something proper within UK Scouting, which is when El Presidente joined the team. He helped us see above the weeds and think about things strategically, as it was very evident at that point that the first Damboree wasn’t going to be our last.

We applied to become a National Active Support Unit, as that seemed the best natural fit, given our national reach, however our application was declined as we ‘only did Beavers’.

So you can see, we tried! 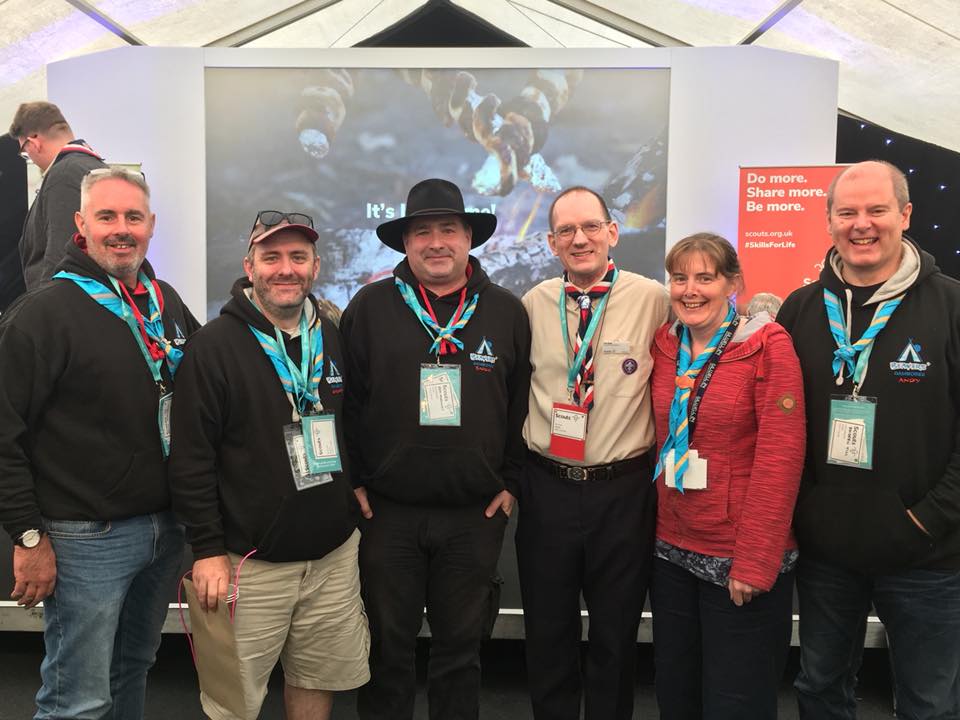 Reunion 2018 was the first time many of us met face-to-face, we’d managed to get a question asked in the QnA after the AGM, which was something like:

“What can HQ do to support Grass Roots initiatives?”

There were more words than that, but you get the drift.  The response was something akin to “We’ll get Team UK to look at how HQ can do more to support grass roots initiatives, like Damboree.”

We felt we needed to ask this question because we weren’t sure what our next steps were to becoming legitimised within Scouting, we’d tried the logical route and been knocked back.

So the core of the (then) Steering Group sat around a picnic bench at Reunion and had a log chew. We needed to answer two fundamental questions:

The answer was ‘Yes!’ to both questions.  With some 250 Beaver Leaders obtaining Campsite permits through Damboree, it was a super success.  So we added a bit of Scope Creep.

We’d had a bit of feedback from Cub Leaders that they were feeling left out on the fab badges. So, for 2019 we added a Cubs badge and started the machinery to give Cub Leaders the opportunity to Damboree too.

We also looked at what our long term aims were.  We agreed it was to have more Scouts camping on Event Passports because, for us, the ultimate demonstration of #SkillsForLife success, from a Nights Away perspective, was more Scouts camping without direct supervision. So the outline plan at that 2018 picnic table meeting was: Cubs in 2019, Scouts in 2020, and hopefully a National Camping Competition in 2021 #SquadGoals.

We wanted coverage of an Executive, and that proper scouting governance wrap, but it was important to us as a group that we had access to a treasurer we could trust implicitly, and who would trust us. Given there was a change in Front Man, it made sense to approach Milton Keynes or Bucks County to give us a home. As we had no relationship with the Bucks County Treasurer, it made sense to us to approach the Milton Keynes District Executive to allow us to become a District-In-Name-Only Active Support Unit, to write up a Service Agreement and therefore formalise our existence.

We were very lucky, we were also offered homes in other Districts and Counties, and we remain grateful to those who did offer, your support for our shared goals is appreciated.

So, as of October 2018 (ish) Damboree Active Support Unit existed, having had its first Service Agreement accepted by the MK District Exec, Damboree ASU was registered on Compass on 5th November 2018.

2019 was the year we grew up.  We grew from a rag-tag collection of do-gooders and accepted our responsibilities and accountabilities.

We looked at where we could improve, what had worked well, what had not worked so well in 2018 and changed some things around.

We took ownership of the e-commerce arrangements, got ourselves an Ops Team, re-arranged the Steering Group a bit and recruited people into the ASU.  Our mission, and we accepted it; spreading the message, supporting leaders locally engaging with their District Nights Away Team, and kicking down artificial barriers to anyone camping.

So back to Route 1 for Occasional Badge approvals….

2019 we included Cubs and Cub Leaders through our Cubs badge criteria and, whilst uptake wasn’t as high as we’d hoped, it seems approx 100 new permits were obtained through the 2019 Damboree cycle so it was a win nonetheless.

We’d decided early in 2019 that we wanted to exhibit at Gilwell Reunion 2019, to help promote Damboree, and the Nights Away Permit Scheme more broadly.

It was an eye opener for the Current Front Man.  The conversations we had with leaders around Nights Away horror stories of local rules and personal views stopping section leaders from taking their young people camping was as informative as it was demoralising.

In an ideal world Damboree should not need to exist.  Those in Manager & Supporter roles should be actively encouraging their Section Leaders and Group Scout Leaders to get their Young People camping. Camping is the very essence of Scouting.

It was clear that our aim to get #EveryoneInTents was going to take longer than we’d expected because of the lag in changing attitudes and entrenched views around Beavers camping.  Oh, and the perennial “If they do a two nighter in Beavers, what will they do in Cubs?” (To which the answer is always, “A more confident 2 nighter!”)

So, where are we now?

Well, we’re still a District Active Support Unit, we still ignore those District boundaries, and we’re cracking on with 2020 which now includes Scouts.

Over the holiday period of 2019, we received an approach from the new Volunteer Head of Active Support, with an invitation to become a National Active Support Unit.

There are still some barriers to cross from that perspective.  Not least, there is no conversion process to go from a District ASU to a National ASU, and POR really needs some work regarding National ASUs, in our opinion.

However as we are a District Active Support Unit, and it will involve an asset transfer out of District, it will need approval of the District Executive.

As far as Scouting goes, yes we are legit; we are within POR as an ASU, we just ignore the boundaries bit. Our Exec is happy with that, our District & County Commissioner is OK with that.

Tacitly yes.  And, by virtue of being invited to become a National Active Support Unit; yes, we’re endorsed.