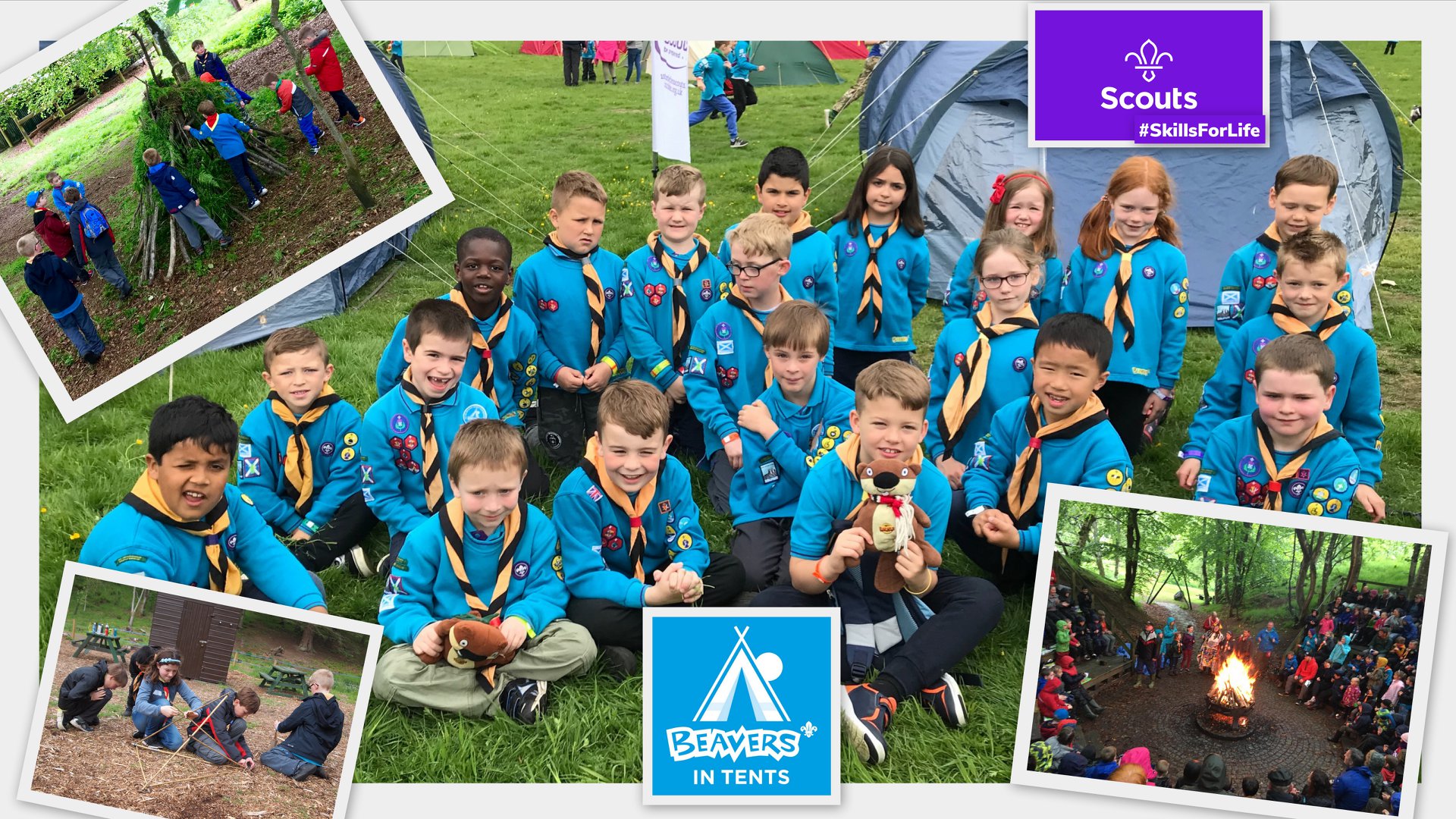 Over a year ago, 1st Portlethen Scouting Group managed to recruit some brand new leaders (some of whom had been scouts when they were younger) for a new Beaver Colony. Having started out with 9 Beavers, it has continued to grow to at the present 24 Beavers. The leaders had visited last year’s Damboree so they would have an idea of what to expect and this year, the new colony teamed up with the other Portlethen Colony to attend the Kincardineshire District Damboree. This would be the first camp the new colony would participate in, and at which 2 of the leaders would gain their nights away permits.

What follows, is an account of the experience by one of the new leaders – Eoin McManus.

“Fun is standing in the pouring rain for two days watching sixty-six 6-8 year olds attempt to hurt themselves in increasingly creative ways… apparently. It shouldn’t be, but somehow, sitting round a camp fire watching steam rise from the huddled mass before me, fun it most assuredly is. Maybe it’s the fact I’m dancing along to a middle aged man roaring a nonsensical song about a man named Joe and when is that not fun? I know this man to be a fastidious and earnestly mature individual, but not now, not here. Here and now he is one with the beaming mass of innocent faces eating up his every word. Children are great that way. Fun is unambiguous when you’re 7. It is what it is.

From the 25th – 26th May your 1st Portlethen Beaver colonies took part in a Kincardineshire District Damboree: for the uninitiated an under canvas overnight scout camp for 6-8 year olds. The most important detail I’ve addressed already above. It was wet. Not a little wet. A lot wet. Fortunately a Scout is not perturbed by something as minor as precipitation. A Scout is always prepared. A 6-8 year old Scout? Perhaps prepared is a wee bit strong, but 6-8 year olds have something more important than preparation. They have enthusiasm! And nothing keeps you warm when its 2 am, you need to pee and the tent is leaking, quite like the embers of enthusiasm.

It really is remarkable watching them adjust. Children bounce in the most remarkable way. Waterproofs soaked inside and out overnight because you left them in a puddle? No problem! On they go, you’ll just be wet from yesterday’s rain rather than todays. Running too fast to stop while running down hill on an obstacle course? Nothing a headlong dive into a bush can’t fix. Just fallen in a pile of nettles while demonstrating your amazing stone throwing technique, you can now regale your friends with what it felt like for the next 24 hours, bonus!

Apprehension was the abiding emotion as our intrepid campers said goodbye to their parents on the first day. Tears, a certain amount of genuine fear. Understandable, everything is a constant stream of newness and it’s just you: no mother, no father, no sister, no brother. But underneath the trepidation excitement. Torches and sleeping in tents. Running through the forest laughing and shouting as fast and as loud as your little body can muster. Friendships forged while huddled for warmth trying to understand the last clue of the treasure hunt. Apprehension lost in flurry of freedom and hot chocolate. Apparently you didn’t use to eat apples. Well why didn’t anyone tell you they tasted this good? When you’ve built up hunger like this and every bit of you just wishes it was dry you’ll eat anything and anything will taste good!

The why of putting your child through something like this was abundantly clear on the final day. Children looking after themselves. Packing their own bags where just 36 hours earlier they needed help just finding their mug. Looking out for each other rather than helplessly gazing around for help to arrive. Freely and willingly washing and feeding themselves. A little soggy army of infectious joy.

You want to know why somebody would volunteer to help lead these little explorers?

Watching them go back to their parents a little older, a little wiser and whole lot more confident. Well that’s worth its weight in Gold, right? Besides I’m 38 years old, I need all the enthusiasm I can get!

Editor Comment – This article was given permission to republish on our website, and we’re grateful the story has been shared as tells so many things about Scouting, Leader, Camping and Beavers, the whole shebang